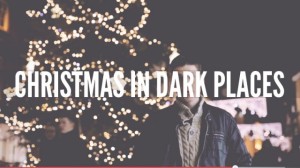 On Saturday I spoke at a carols concert near Eastbourne. I was picked up by a man I last spoke to in March. "How's your wife?" I asked. "I'm afraid she died last month" was the response that crashed through all our small talk. She'd been a perfectly healthy 65 year old. Diagnosed with cancer in April. Buried in November. And now Christmas looks very different.

After the concert many people spoke about the loved ones they had lost this year. One woman - a regular there - had been hit and killed by a truck while cycling. Others had buried spouses.

Yesterday I spoke at a carols by candlelight. Before the service a man in a wheelchair was pushed in. I didn't recognise him at all. The vicar of the church introduced us. "Glen, this is my father."

"Barry??" I asked. Barry was a member of another church, but he'd always been a great supporter of All Souls, Eastbourne. Always full of faith and encouragement. Recently he has suffered a massive stroke and Parkinsons has taken hold. Now he is in a nursing home, finding it difficult to swallow let alone eat. "So nice to see you Barry!" I say. Inside I was thinking "So sad to see you Barry."

I preached again on Christmas in dark places (sermon here). Afterwards a woman told me she'd buried her husband that week. Another man told me his daughter had just lost her child in labour. Another spoke of a divorce this year. Everyone agreed Christmas was hard.

At the end I spoke to Barry. I took his hand and he grasped it hard. He whispered a phrase. I pulled in even closer: "Say again Barry?" He said it again. I thought I caught it but I wanted to make sure. Now my ear is right by his lips. "One more time Barry?"

That five word sermon blew mine clear out of the water. These were not the words of an ill man to a well man. This did not come from a trapped man to a free man. This was from heaven to earth. This was divine wisdom from a man so battered he can barely move his lips. Yet in his suffering Barry knows - and he preaches! - in the valley of the shadow, Christ truly shines.

9 thoughts on “He shines in the dark”